Are All Samaritans Good?

​bandaged his wounds, having poured oil and wine on them. Then he put him on his own animal, brought him to an inn, and took care of him. 35The next day he took out two denarii, gave them to the innkeeper, and said, “Take care of him; and when I come back, I will repay you whatever more you spend.” 36Which of these three, do you think, was a neighbor to the man who fell into the hands of the robbers?’ 37He said, ‘The one who showed him mercy.’ Jesus said to him, ‘Go and do likewise.’


I vaguely remember learning about this story long ago in Sunday School.  I was probably 7 or 8.  And I remember thinking how awful that 2 ministers would ignore the poor man.  All I could imagine was my own pastor, and how I was absolutely certain he would never do such a thing!  And I was actually angry that a story like this was told that so maligned clergy!  I remember the message that day was to not be like the ministers who were cold and cruel, and instead be like the Samaritan.  And from that day on, I vowed to proudly be a Samaritan and not a cold, cruel pastor!  Okay, not a bad interpretation.  It was definitely a lesson to go and do likewise, it taught me to be compassionate, caring, and loving.  But it was a 7- or 8-year-old interpretation.  And unfortunately, without digging a bit more deeply into these wonderful, rich, compelling and challenging stories, that’s where we often remain.  It’s not bad, but we miss out on so much more!

In his wonderful book on Jesus’ parables, Klyne R. Snodgrass wrote, “Stories create worlds.  By reading a story we, at least temporarily, inhabit that world.  If we bring too much of ourselves into that world, we reshape it and rearrange its landscape.  But if we do that, we have created a world other than what the story portrays” (p. 24-25).  This is the challenge of the parables – to immerse ourselves into the world that is created by the gospel writers, but also into the world of the original listeners.  In other words, we need to hear this parable as a typical first century Palestinian would hear it, which means delving into the culture, traditions, and people of that ancient, foreign time and place which we know little about.  So let’s dive into that world!

It almost sounds like the beginning of a good joke – a lawyer, priest, a Levite, and a Samaritan walk into a bar…  And then there’s the image of the road between Jericho and Jerusalem – you know the one…  The original listeners would nod knowingly, having some idea what to expect from these characters all trudging down that road, but 2000 years have changed our perspective drastically.  What did that road look like?  Were there others on the road, or would it have been abandoned?  Was it dangerous?  And what exactly is a Levite?  These are all the insights that more fully reveal Jesus’ intent in telling the story.
rocky landscape.  Traders and others who travelled the road were frequently targets for bandits and robbers which earned the route the name, “Way of Blood” because of all the blood that was spilled on that road.  The entire trip would most likely have taken 6 to 8 hours, an exhausting trip.  The road was also quite narrow, so it was impossible to avoid attack.  But the other side of that reality is that there really was no way to “pass by on the other side of the road,” so the priest and Levite would quite literally have had to practically step over the man to pass by.

the population is illiterate, this lawyer would have been in the minority, knowing how to read.  Jesus knows that.  And Jesus knows that the lawyer already knows the answer.  (I always picture the lawyer responding smugly, showing off.  The text doesn’t say that, but I think it fits!)  So he responds with the love command: “You shall love the Lord your God will all your heart, and with all your soul, and with all your strength, and with all your mind; and your neighbor as yourself.”  This command is a combination of Deuteronomy 6:5 and Leviticus 19:18, and is the heart of Jesus’ teaching throughout the gospel – love of God/love of neighbor – nothing else matters.
​​
​But the lawyer still isn’t satisfied.  He wants more.  We are told he wants to justify himself.  In other words, he wants to know what he can do to inherit eternal life.  He can’t see that eternal life is a gift of God’s grace and mercy.  The lawyer lives in the realm of cause and effect – he needs to do something in order to earn his place.  And he wants specifics, especially limits.  How far must he go?  How many people must he love – what kind of people must he love – what is the bare minimum he must do to assure himself he’s done enough to get the goods.  From his Torah study, this would also be a question he would have already known, so his testing continues.  He would have known to turn to Leviticus 19:17-18 where neighbor is defined:
The rabbis of Jesus’ time understood neighbor to include all Jews, but were divided as to whether to include proselytes.  In any event, Gentiles were never understood to be neighbors.  In several rabbinical writings, it was
stated that one was not to seek the blood of a Gentile, but if Gentile was found to be in danger, there was no obligation to rescue (from a midrash on Ruth).  So the lawyer gets schooled by Jesus!

Which brings us to the man who was attacked.  We know nothing about him.  We have no idea whether he is Jew or Gentile.  All we can surmise is that he is probably naked and visibly injured.  Kenneth Bailey, in his book Through Peasant Eyes:  A Literary-Cultural Approach to the Parables in Luke explains that in the ancient world, there were 2 ways one could be identified – by their manner of dress or by their speech.  This injured man is most likely unconscious and cannot be identified. He is simply one who is in grave need.  So in light of the rabbinical teaching above, it could be open to debate whether he is a “neighbor.”

Which brings us to be priest and the Levite, both leaders in the temple.  We don’t know if the priest and Levite would have been coming from or going to Jerusalem, but in any event, they would have most likely been there on temple business.  In order to enter the temple, one must be ritually clean, which according to the law means that touching a dead body, coming in contact with bodily fluids (such as blood), or touching one who is unclean (a Gentile or a sinner), would have rendered them unclean.  Likewise, Sirach, a book from the Apocrypha, states:
​
This is the world in which the priest and Levite live.  It’s a little disconcerting for us to read this!  But in their worldview, help offered to sinners may be an affront to God who Sirach tells us hates sinners.  So in their defense, their own relationship comes into question if they offer help to any stranger.  The goal for leaders of the temple was to avoid sin and maintain ritual purity.  That was the theological system in which they operated, and was the view of God they held.  And any deviation from that was believed to put their relationship with God in jeopardy.  So without being able to ascertain the identity of the man, whether he was a sinner or a Gentile, or in some other way impure, their religious code demanded that they pass by.

Then there is the Samaritan.  The good guy!  But that would never in a million years been the opinion of any Jew in Jesus’ day.  Samaritans were hated and viewed as enemies, along with Philistines and Edomites who are continually demeaned in the Old Testament.  Early rabbinic writings of Jesus’ day declare, “He that eats the bread of the Samaritans is like to one that eats the flesh of swine” (Bailey, p. 48).  The bitterness between Jews and Samaritans had actually increased during Jesus’ lifetime because Samaritans had been accused of defiling the temple during a Passover feast, scattering human bones in the temple court (Josephus, Antiquities, 18:30).  In fact, it was said that “Samaritans were publicly cursed in synagogues; and a petition was daily offered up praying God that the Samaritans might not be partakers of eternal life” (Oesterly, in Bailey, p. 48).  Bailey further states that in the emotional climate of the first century, a story about a noble Jew helping a Samaritan would have been received more positively than this story about the Samaritan being the hero (Bailey, p. 48). 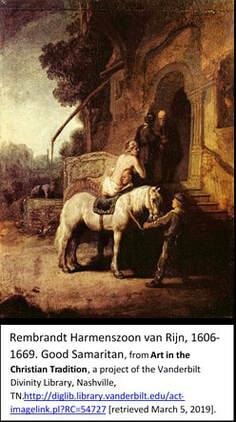 This parable takes us to many different layers. There is the Sunday School layer: be like the Good Samaritan and stop and help people along the way, aka our own Good Samaritan laws that are on the books in many states protecting people from legal action when they stop to help someone. But this can go much deeper.

There is the call to splanchnizomai, that gut-wrenching compassion that we are called to share with others, even our enemies. But there is also something more subtle going on here. Jesus is challenging the Jewish law that did put limits on what defined one’s neighbor. This fits with Jesus’ actions throughout Luke’s gospel where he broke covenant to heal and show compassion. Jesus actively sought out those who were unclean, those who would have been considered sinful. He healed Gentiles. He forgave sinners. He ate with tax collectors. He healed on the Sabbath. In other words, for Jesus, compassion has no limits. And a religious code or a theology that teaches otherwise is not in line with God’s overwhelming grace and mercy and love.

One of the things I absolutely love about the parables is that every time I read them and study them, something else hits me. It is like reading them new everyday. And the more we learn about first century Palestinian history and culture, the more insight we have into these wonderful, transformational stories. And so we begin our journey through these parables from the gospel of Luke. And as we encounter these characters and travel to these ancient places, we will learn more and more about our God who will stop at nothing to bring overwhelming and abundant forgiveness, grace, healing, and love.

Blessings to you as you journey on your roads, wherever they may be.
What questions does this parable raise for you?  What is your initial reaction?
​Has this parable caused you to think differently?  How?
​What character most intrigues you? What character do you relate to?
​When might showing compassion be a challenge?
Powered by